Cherries Jubilee's ear is pretty badly chewed.  I planned to smooth over it using the self-drying apoxie sculpt type stuff available at my local craft store.  Then I saw the price tag.  WHAT?  $10 for a tiny little block maybe big enough to fix like 4 ears or 1 leg?

I should warn anyone reading this that I'm under some pretty good budget restraints.  Some of the more expensive materials will just have to wait, which slows down or puts certain re-stores on hold.  I'm great at coming up with other solutions though . . .

Also, I won't be doing a lot of re-pinking.  I will do some, for anyone just dying to see, but for a lot of ponies, it's just TOO MUCH PINK.  Take for instance Lickety Split and Posey.  Posey has original pink hair and while faded, is very pretty.  It matches her symbols beautifully and really works for her.  Lickety Split on the other hand would be way too pink if her hair was pink too.  Wasn't it white on the TV show?  I think the white looks much better.

My sister gave me all her ponies when she got married.  They didn't really have space for them and her husband couldn't stand all the pink in their living room.  Her loss is my gain as it was killing me to split up all the families we put together as kids.  She collects Breyer horses now anyway and I gave her all mine, so she made out just fine.

Kind of look like they're being tortured, don't they?

​​Do you see how I've got both hair and strips of paper towel wrapped around the curlers?  I did that to help hold the hair in place on the curler.  DON'T DO IT THAT WAY.  It made the hair come out kind of crimped looking and the curls didn't hold well.

​​I'm doing boil perms and these guys were dried in front of the air conditioner.  I think this may also be part of the problem since the cold air cooled them down really quickly.

Notice a certain lack of curl?

There was no middle ground with these guys.  They were either practically mint, or super baity.  Tickle was covered in large blotches of brown mold with rusty spots all around her symbols.  Confetti had lovely hair and symbols but had brown blobs all over her body.  If you've read the "my philosophies" section of this site you know what it takes for me to consider a pony "bait" and I thought these two were beyond hope.  They've both spent the last few years in bags to prevent any of the yuckiness from spreading to other ponies.

Thanks to Templeflower I knew about the great results people were getting by sunfading white ponies in a bath of hydrogen peroxide.  Since Tickle was in such gross shape, I figured I'd try it on her too.

I'm using a cheeze ballz jar and a mix of 1/2 3% peroxide and 1/2 water.  This is for no other reason than that I didn't have enough peroxide to completely cover the pony.  The colored things are clear vases I'm using to hold the ponies down.  Their hair is angled in such a way that it's touching their bodies as little as possible as chartreuse  hair will bleed and stain their bodies.  I'm in Virginia so the sun is fairly intense.

Can anyone explain how a bug got into Confetti's jar when it had a lid on it the entire time?  See my foster dog Jake's butt in the picture with Tickle?  Thanks Jake!

It's AMAZING how they turned out!  They were each only soaked for a day, I didn't want to push it with the chartreuse hair.  Confetti's body is significantly whiter.  Most of the brown blotches have completely disappeared and the worst ones are light enough that they aren't bothersome.  She's gone from baity to a very good condition pony.  Tickle didn't turn out quite as good, but is much more tolerable.  All of the brown spots faded to white at first but gradually turned back to a very light brown after she was out of the peroxide solution for awhile.  The spots are still significantly lighter and don't bother me nearly as much as they did.  She needs her forelock re-haired but it's not worth it to me to spend the money on hair for an only ok condition pony, so that will have to wait.  The peroxide soak did not do any damage to their glitter symbols.

Neither of them have to live in baggies anymore!!!

For some reason, I had two nice Sundances in my sale box while the Sundance I had decided to keep was covered in smooze and had super frizzy hair.  What was I thinking?  After switching Sundances, this restore was pretty easy.  The new Sundance just needed a good washing and her hair combed.  She had quite a bit of green crayon on her, but an OxiClean bath and magic eraser took that right off.  Her tail curled beautifully, I just hope it holds.

Megan was washed the same way as the ponies, with Dawn dish detergent, magic eraser, and Pantene shampoo and conditioner.  Her dress was given a good scrubbing in the sink with Dawn dish detergent and came out spotless.  I cut off the frayed edges off the ribbons on her dress and melted the edges using a lighter so that they won't fray again.

Baby Blossom was easily in the worst shape out of this set.  Frizzy, rusty hair, smooze, and large brown blotches were the least of her problems.  See anything different about her color?  That's white paper behind her in this photo.  She was faded so white that there was barely any difference between the color of her body and white printer paper.  I actually checked on the boards once to make sure she wasn't some type of variant.

I decided to go ahead and try dyeing her back to purple.  I only know of customizers who use dye, but I figured it couldn't make her worse.​​

Cleaning her up turned out to be easy.  A nice long OxiClean bath removed the brown spots and most of the smooze.  It was easy to clean the rust out of her tail.  I used the same batch of dye that I used on SeaLight and WOW!

I really like how she turned out!  It's not quite the right shade purple, still a little on the blue end.  I like it much better than dingy white though!  I was surprised at how dark her hair turned out, I thought it would be closer to her body.  A friend of mine who does a lot of customs told me that this is normal.  Pony hair tends to turn out much darker than their bodies, even when soaked the exact same amount of time.  I guess that's because of the different materials that were used for bodies and hair.

This is Daisy, my sister's very first pony. Daisy is a he, and is married to Dancing Butterflies. He's covered in smooze. The story in my ponyland is that the ponies who got smoozed when the witches from the volcano of doom attacked never quite got it all off. It's something they're sort of proud of since they got it fighting off the smooze.

​All I have from this set is Baby SeaStar.  She was full of what I guess was dirt. It was grainy and a very different texture than rust. 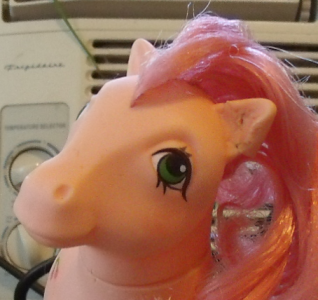 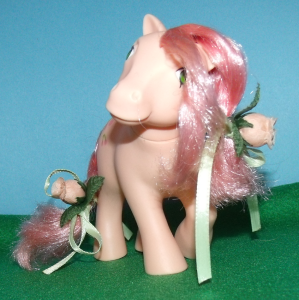 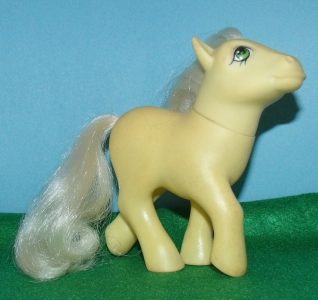 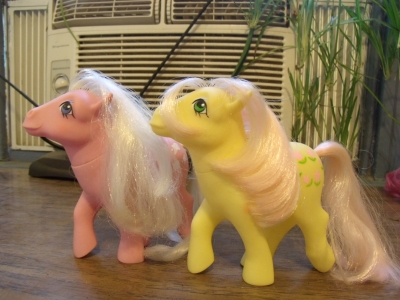 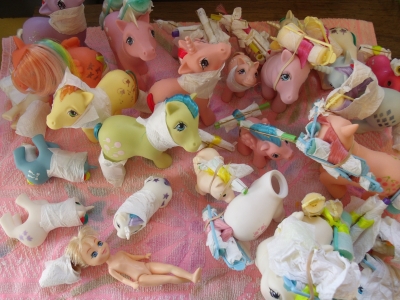 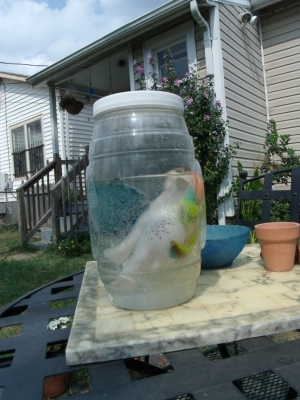 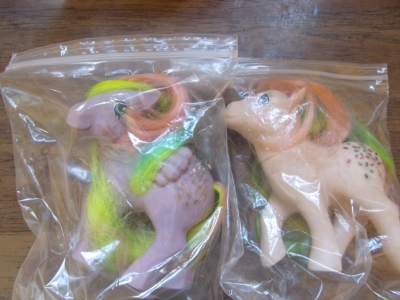 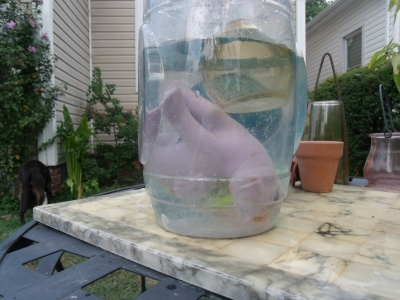 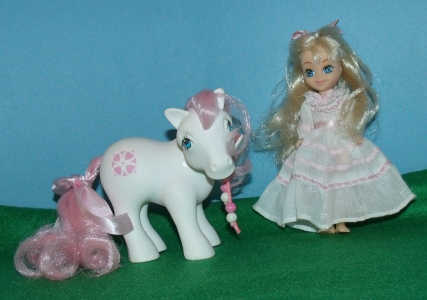 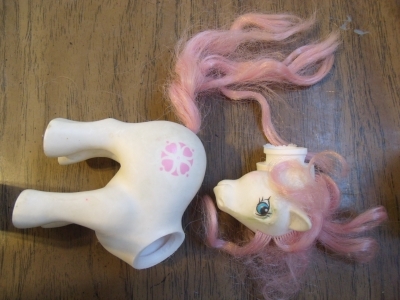 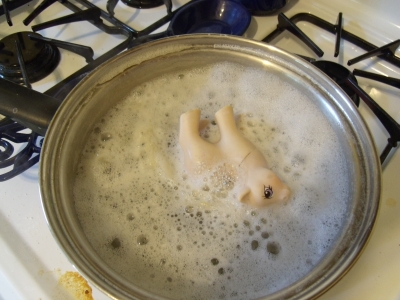 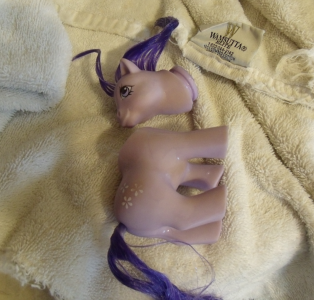 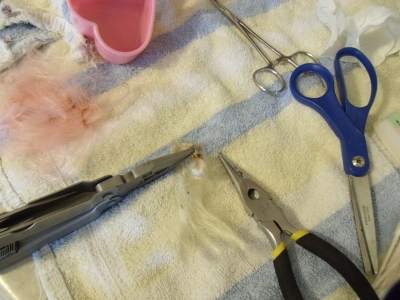 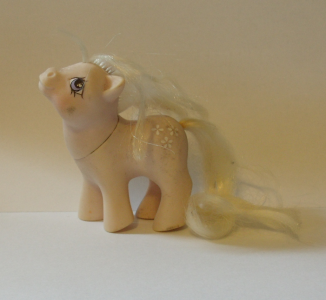 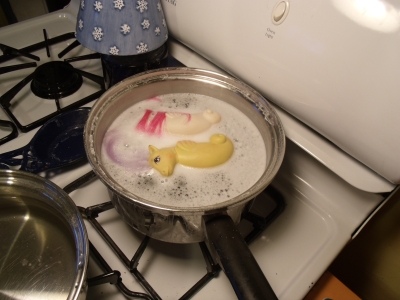 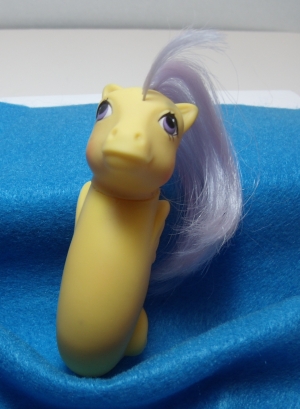 I have her cassette tape somewhere!  It still plays and everything!  It's making me crazy that I can't find it.

​​My ponies have traveled through three states and it never made it with us.  It's got to be somewhere in my mom's house.  It has to show up eventually, right? 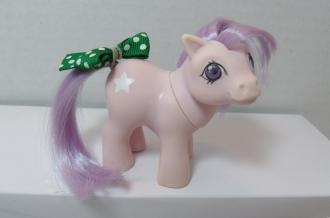 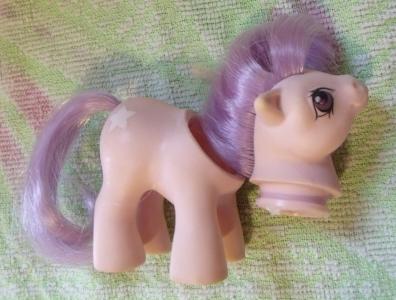